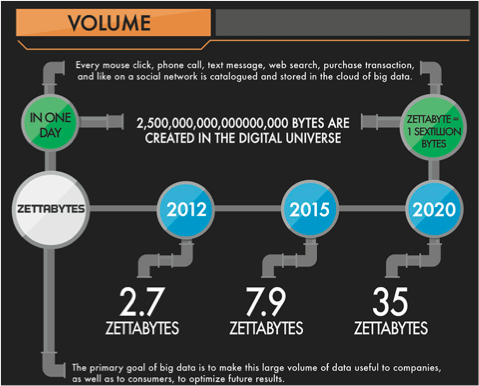 As shown above, each day 2.5 quintillion bytes of data is generated which is growing exponentially.  With 90% of the total data being generated in the last two years, data storage poses a challenge.

What is the Cloud?

The cloud solves the problem of storage. Individual computers cannot store the amount of data being generated.  The cloud consists of hundreds of thousands of computers based in a building called a server farm, that constantly work generating and storing data.  Google, for example, uses multiple server farms to store all the information that can be searched for instantaneously online.

Genomics, the Cloud and Healthcare

Genomics is a field where the cloud has been especially valuable.  Each sequenced human genome generates over 15 trillion gigabytes of data which far exceeds the capabilities of a single computer.  As more people have their DNA sequenced, data volume will skyrocket. Using the power of the cloud, the increase in data will not be a problem.

Many experts agree that the cloud and it’s computing capabilities are the only model elastic enough for DNA sequencing.  With the cloud, an entirely new genomics industry is possible, transforming medicine to a proactive system and thereby improving the health of the world’s seven billion people.

Do you think that privacy concerns will hinder the growth in cloud storage of genomics in the next few years?

This site uses Akismet to reduce spam. Learn how your comment data is processed.